A Synopsis of
A HISTORY OF TANG HALL & ST. AELRED’S PARISH

The name ‘Tang Hall’ may seem Chinese but in fact it’s English.

The name derives either from the French word ‘Etang’ meaning a lake, or a pond, or more probably from the word ‘Tongs’, a fork made by the joining of the two becks which run through the area and into the River Foss along Foss Islands Road.

In the Middle Ages the area between Walmgate Bar and Layerthorpe was artificially flooded and stocked with fish to form the King’s Pool. To the east of this artificial lake was the swampland called ‘The Tang’. Nowadays it is difficult to imagine the area called Tang Hall to be a large swampy field stretching from Heslington to Heworth. It had only three houses situated along Tang Hall Lane, a Windmill and a farmhouse that is now a Post Office.

The northern beck flows through the eastern end of Stockton Lane and Appletree Village; the southern beck runs through Stamford Bridge, Murton and Osbaldwick Village. Their united waters wound their way through the ‘Old Tip’ now ‘St Nicholas Fields’, of bushes and rubbish before emptying itself into the River Foss. The land where the two becks join, was overlooked by the Manor, the Starkey family home, called ‘Tang Hall’; the Hall by the Pond, or the Hall at the Tongs. This Manor House was demolished in 1978.

The many floods in the area have demonstrated perfectly well what the Tang Hall area would have looked like at the turn of the 20th century.

After the First World War, York City was becoming overcrowded and the York City Council purchased land from the Church Commissioners to build a new estate to the East of York. The building of Tang Hall started in 1920 with part of Fifth Avenue and Carter Avenue. The sale of the Starkey’s estate allowed the York City Council to buy the land and build between Tang Hall Lane and Melrosegate. A new world was opening up. People rushed to rent the new houses being provided by the Council. It was rewarding at last to be able to leave the slums of Walmgate and enjoy the new dwellings in the countryside, Tang Hall, a land of freedom between the becks.

By 1926 the slums of Walmgate were in the process of being demolished and nearly 1000 new houses had been built in Tang Hall. The people longed for a community centre, a nucleus of social activities, a focal point to welcome everybody. That is why in Tang Hall something had to be done. Land was found in Flaxman Avenue. A community hut was proposed and a six-penny subscription per week was ordered; volunteers eagerly subscribed thus making the dream come true as quickly as possible. On 19th February 1927 Arnold Rowntree, the Lord Mayor of York, officially opened the Flaxman Club. The local Gazette emphasised the state of idealism and fraternity in Tang Hall. 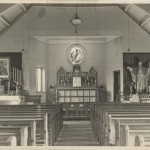 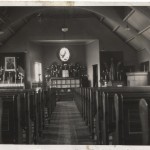 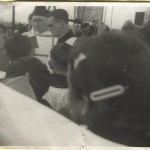 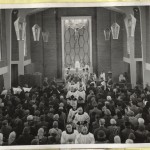